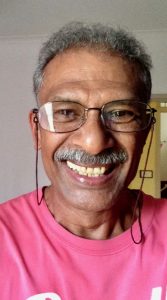 Pemulwuy Weeatunga is the pen name of John M Wenitong, chosen for the FfC series.

John is a 65-year-old indigenous Australian man of Kabi Kabi Aboriginal, South-Sea Islander, Nepalese, Indian & Sri-lankan origin. His Australian indigenous mob is caretakers of the mainland area from approximately – the Fraser to Moreton Islands area of the SE-Qld coastline. John was born in Gladstone, Qld Australia. He plays guitar, photographs nature, writes poetry and songs and tries to sing occasionally. John has four children from 22 – 43 and 6 wonderful grandchildren. John’s mother – ‘Aunty’ Lorna Wenitong – started the first Aboriginal Health Program out of Mt Isa, Qld., in the late 1960’s and his younger Brother Mark, was one of the first indigenous Doctors in Qld and credited with being the mind behind The Australia Indigenous Doctor’s Association [AIDA] in Australia.

“Give me a lever long enough and a fulcrum on which to place it, and I shall move the world.”