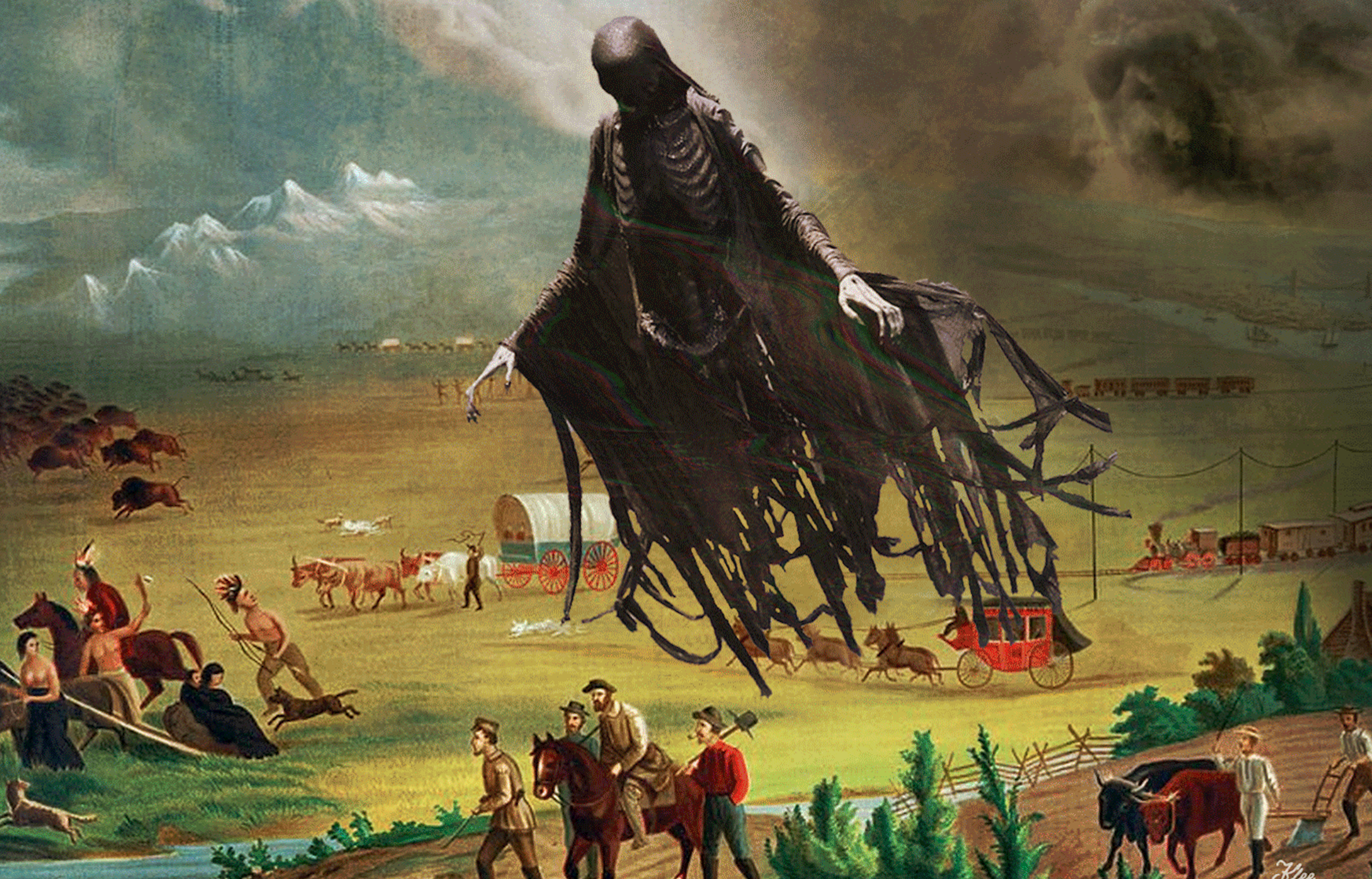 “‘MANIFEST DESTINY’ was a widely held cultural belief in the 19th-century United States [& prior, in Europe] that ‘American’ settlers were destined to expand across North America. [Sound familiar?] There are three basic themes to manifest destiny:

1 – The special virtues of the American people and their institutions [founded on slavery]. 2 – The mission of the United States to redeem and remake the west in the image of the agrarian East [No-no-no-no-no! as Gus would say], & 3 – An irresistible destiny to accomplish this essential duty [& ya can bets ya boots, we’ll kill anyone that gets in the way!”

The Christian “Bible” ‘they’ supposedly followed, was written by about 40 people and was started about three and a half thousand [3.5K] years ago, in the Middle-East. Many of the 1,189 or so chapters, were written long after the events took place. Some from memory, some from other earlier texts. This segment from ‘Ecclesiastes’ has been made into a well-known song worldwide & until recently, I thought of it as a wonderful song of patience & empathy.

Now, I think it’s a ‘wrong-un’ in its basic concept of lifestyle advice, supporting – even insinuating the need for – hate, breaking, killing, tearing and war.

A time to kill? A time to hate? & a time for war? I don’t think so Sunshine! Back to the corner dunce-seat with Homer Simpson, whence thou belong-est! Thither-thou how-now? In fact, the underlying concept in this section of Ecclesiastes is very early-European in its arrogance toward others, and its support of violence as a ‘negotiation-tool’.

For the Christian explorers, the morality of their ethics seemed to alter to take in their exploratory lifestyle (one hand on the Bible – the other with a gun), with a hand on the heart, and Manifest Destiny inscribed on their minds [‘Hey-lookout!’; Takes on a whole new meaning!]. Oh-yes! The major European Churches gave their support/blessing to such activity in Papal Briefs apparently [of course! More people; More money flowing in from superstitious folk, regarding that final trip to who-knows-where].

This style of ‘exploration’ certainly works well for land acquisition as we’ve seen in Oz, the USA & other former indigenous lands worldwide. In fact, the USA & Mexico’s long-term issues stem from the wars the colonial English made against Mexico, in an attempt to take over their lands also. Unfortunately, for them – Mexico already had an army and guns etc too!

FYI; The Western world is currently worried about China taking over land and peeps they see as part of China from ancient times. Yet, England went to war against Argentina for the Falkland Islands a few years ago & no-one batted an eyelid! Have a look at where the Falkland Islands are – in relation to England – and tell me Commie-China is Bad and the West is Good! Feck-me!

Back to Colonial-Europeans taking over everywhere they land: “Yes sir! We have ‘manifest destiny’ on our side: which means, we can & should take over any lands not being used ‘productively’ – as We know productivity [& we can see where that sorta philosophy has got us now, ‘Henry’! The entire friggin Earth is sick! Thanks for that!

Mexico, was not filled with happy, sunburnt, peaceful folk like many of the lands they ‘found’ anew, and grabbed. [NB! An addendum to this wonderful very fortuitous philosophy, says; We (with the Church’s blessing!), can use the heathen natives as Slaves; to make the land productive, if needed – which was also very lucky – for Us. Thank-God – God was on our side!”

On the other hand, or, meanwhile in Australia, “Amazing Tales and legends of Aboriginal Australians”, written by David Unaipon, whom gathered and translated various beliefs and legends in the 1920s; also, from memory & ancient oral traditions, much older than the middle-east stories. None of them involved wars for land or possessions, or killing entire towns for ‘Sinning’, strangely enough. The articles he wrote, were commissioned by the Universe of Adelaide [Great work UoA]. That work included: “Australian Aboriginal belief in a Great Spirit”, and we might easily imagine such stories/beliefs came from somewhere in the 65,000+ years before Jesus, Mohammed, the Mormons, Scientology, Buddhism etc were ‘born’. Apparently, The Great Spirit lived daily among his people here from ancient times & the entire nation of separate Tribes lived within the ancient laws as part & parcel of everyday life.

You & I can now see why He sent a ‘messenger’ to the Middle-East, [and not Australia] just by looking at the history of bloodshed & wars there, for the entire period of the bible’s ‘bloody’ history. The Middle-East mob needed a miraculous-person/peace-maker, to stop the history of hate & killing between the Tribes and Clans. Unfortunately, the mainstream society there didn’t see the miraculous chance for peace & ‘shot the messenger’, causing even more hate & violence in the lands right through to today’s issues in the area.

D. Unaipon & our 1st-people’s ancient stories certainly never mentioned that there was ‘a time for hate, war and killing’ that I know of, or could find. [FYI: Unaipon wrote so eloquently because he’d studied Latin and Greek and loved to speak and write ‘properly’.]

Excerpt from David Unaipon’s works: “Wonderful is the soul of man. A capacity for the Great Spirit of the Eternal God. Go back into those ancient civilizations and review the wonders. Those sensational discoveries in the valley of the Nile or in the jungles of Indo China, or let your mind be carried away to far off Peru or Yucatan, or think of the grandeur that once was Rome’s, the glories that once belonged to Greece. Amongst these ruins are monuments and fragments of magnificent temples erected to their gods. These are evidences that go to prove that man is a worshipping creature irrespective of color, language, or clime. The only difference is, as a nation’s conception of the Great Spirit, so is their form of worship,” (Unaipon, D., cited in Muecke and Shoemaker, 2001).

It is worthwhile remembering here that while Mr. Unaipon was writing so eloquently and with such passion, many Australian Aborigines and Torres Strait Islanders [not to mention the South-Sea Island ‘slaves’] were being used as ‘non-human’ slaves and having forms of genocide practiced against them in various other parts of Australia – because they were black-skinned, didn’t speak English, and lived a very different, ‘nature-al’ lifestyle, from what the colonials thought of as ‘normal’. It seems v-much, like Manifest Destiny was of a mind here also.
Unaipon goes on to speak of the differing ways of worshipping in grand buildings and Cathedrals worldwide and says of his own people:
“Not so with the Aborigines of Australia. We build no place of worship, neither do we erect altars for the offering of sacrifice, but, not withstanding this lack of religious ceremonies, we believe in a Great Spirit and the Son of the Great Spirit. There arose among the Aborigines a great teacher, Narroondarie; he was an elect of the Great Spirit. And he spoke to our forefathers thus:

‘Children, there is a Great Spirit above whose dwelling place is Wyerriewarr. It is His will that you should know Him as Hyarrinumb; I am the Whole Spirit and ye are part of the whole, I am your Provider and Protector. It has been my pleasure to give you the privilege to sojourn awhile in the flesh state to fulfill my great plan. Remember (porun) children (nukone illawin), your life is like unto a day, and during this short period on earth you are to educate yourself by your conduct to yourself as a part of Myself and your conduct to others, with the knowledge that they are part of Myself.

Live as children of your Great Father. Nol kal undutch me wee (control your appetites and desires). Remember never allow yourself to become slave to your appetite or desire, never allow your mind to suffer pain or fear, lest you become selfish, and selfishness causes misery to yourself, your wife and children and relations, and those with whom you come into contact. Selfishness is not of the Great Spirit.

Cultivate everything good, moderation in food and pleasure, be generous to others, develop a healthy state of mind and body. Body and mind governed by good and pure morals with kindness for others, remembering that they are a part of that Great Spirit from whence you came (Unaipon, D., cited in Muecke and Shoemaker, 2001).

I also came across this little gem from our NT, ancAu peeps when I was researching to teach at a Uni, back in the day. An simple initiation code from the NT: A study of initiation ceremonies in Arnhem Land showed that in most groups, the following ‘code-of-behaviour’ was taught to the young men at initiation: “This is what the first old men told us. In some areas it is the old women, not the old men, who administer this part of the ceremony.”

“Do not be greedy. Eat a little and give to others, especially to old people, to women, to sick people and to strangers ‘coming by’. If someone brings food near you, do not say: ‘Give me, I’m hungry’ Just sit there.” (To do otherwise is ta dikku or ‘raw mouth’, meaning uncouth)
“Do not steal other people’s food”
“Do not steal other people’s belongings.”
“Do not tell lies; speak the truth.”
“Do not talk back to old people.”
“Do not swear”
“Do not grumble.” (This was not included in all groups.)
“Do not laugh at strangers”
“Do not laugh at women”
“Do not stare at women”
“Do not ‘ask’ a woman [do-ya-wanna-tumble] if you happen to meet when hunting”
“Have a ‘strong heart’, ngoi dal”.

I’ll be taking questions at the next session lol  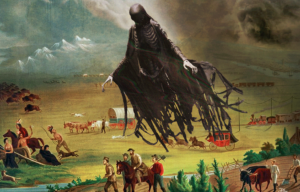